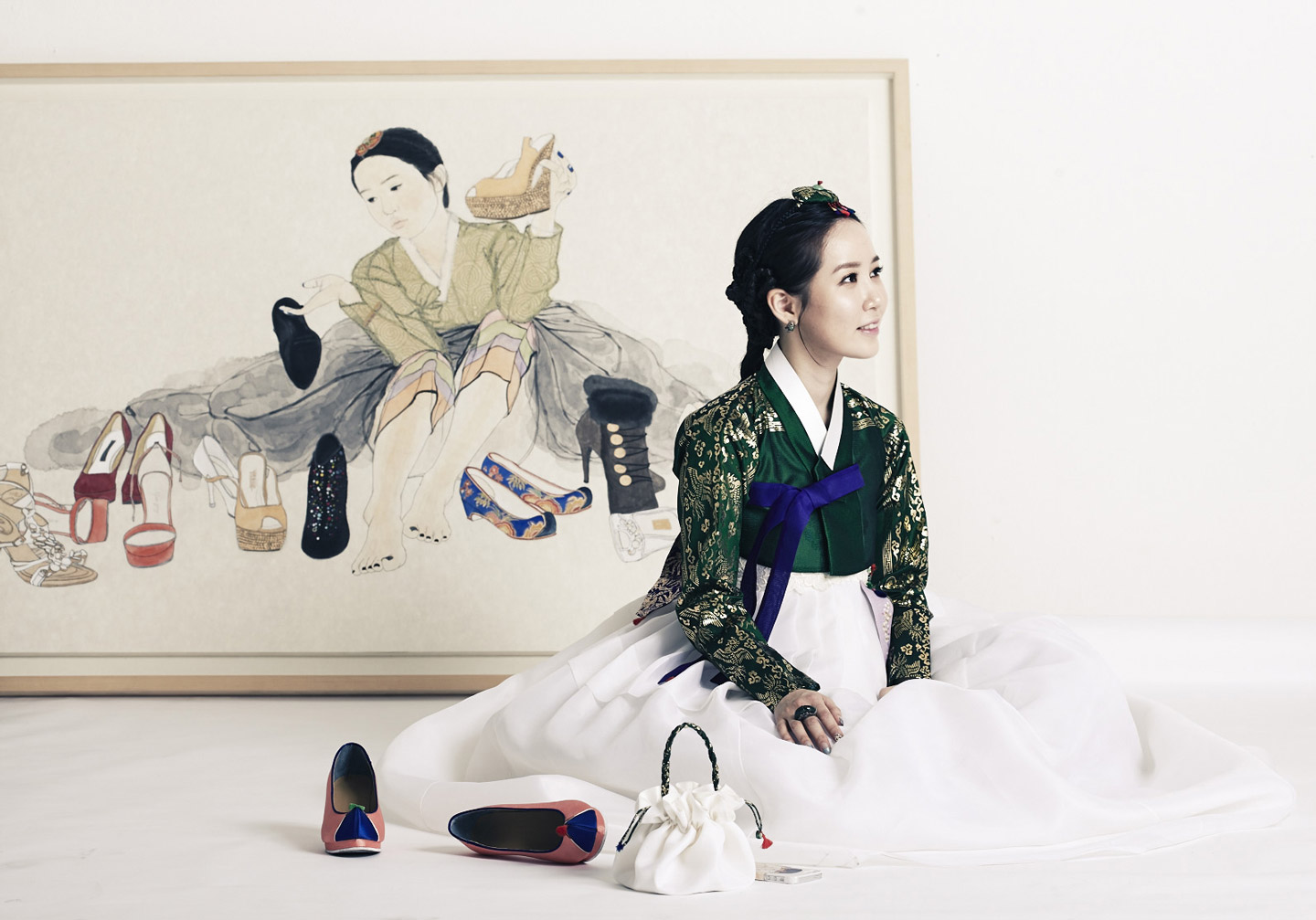 Starting at a young age, artist Hyun Jung Kim showed signs of great artistry. And after graduating from the prestigious Sunhwa Art Middle School and High School, she went onto studying korean painting and business administration at Korea’s top university, Seoul University. There she graduated with the Class President Award and continued her studies to complete her master’s degree in korean painting.
Then starting in March of 2013, she lead through four private exhibitions with the concept of (Coy Story), each one had become a hot topic during its period. The aim of her work in “Coy” line of work was to take the elegance and mysterious atmosphere of a hanbok, a traditional Korean attire, and to place it upon a person in an informal and everyday setting. But to do so isn’t a simple process. The artwork she makes goes through a process in which the subject is first drawn nude. Then the hanbok is handmade by manually dying traditional Korean paper called “hanji” and making a collage out of them on top of the nude picture. By making the hanbok this way, they become translucent, giving away the message that “we can see right through her”. With such an original idea and concept, Hyun Jung Kim displayed expressive techniques that were considered “daring” and received attention as a rising star amongst Korean painters as she attempted to evolve the basic theories and techniques of authentic oriental painting. And with emphasis on passion and experience, she was deemed an “idol of Korean painting” within the art world as she found new ways to spread Korean art's “POP” to the regular public through social media. Through this, she now is receiving wide recognition as a contributor to the art world and in the history of art. Following an exciting 2013, Hyun Jung Kim was again put in the spotlight in April of 2014 when she was selected by Dong-A Daily News as the only artist to make it on the list of the “hundred people who will make Korea shine in the next ten years”. Keeping the momentum going, Hyun Jung Kim opened a private exhibition on June 19th, 2014 on the first floor main exhibition hall of the famous Gana insa ArtCenter. During this private exhibition, titled (Coy Olympics), the art went beyond the normal adolescent woes and worries that were felt in previous artworks. Instead, she gathered upon the canvas relief of the fragments of emotions and worries that commonly occurs within our daily lives, Along with normal painting techniques, she applied various other art forms, such as sculptures and motion pictures while experimenting with new techniques and styles such as 3D printing as well. Also, during this period, she was on two episodes of a program called “Conversations with the Artist”, which garnered the largest audience, consisting of 3,734 people, since the opening of Ganainsa Art Center. She continued to break records through the remaining days as the cumulative number of people overall to visit the center was 24,000 people. On June 30th,2014,ten day safter the opening, the exhibition ended in great success. Currently, she is a lecturer at Kyung-hee university and Sung-shin Women's university and is working to widen her scope. She is working on developing her skills and improving upon her techniques and styles. She will continue to bring about new and awe-inspiring work.