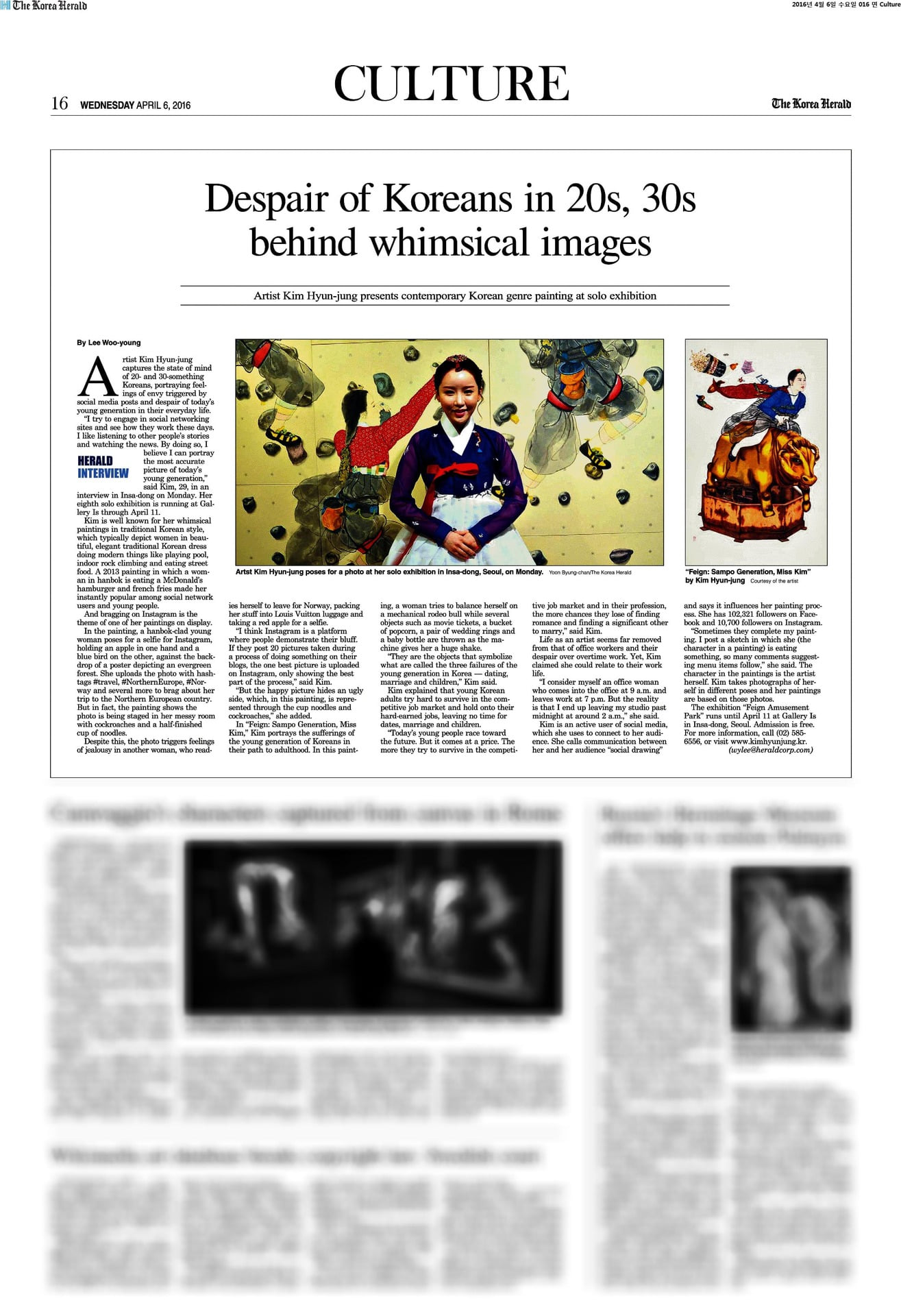 The Korea Herald_Despair of Koreans in 20s, 30s behind whimsical images 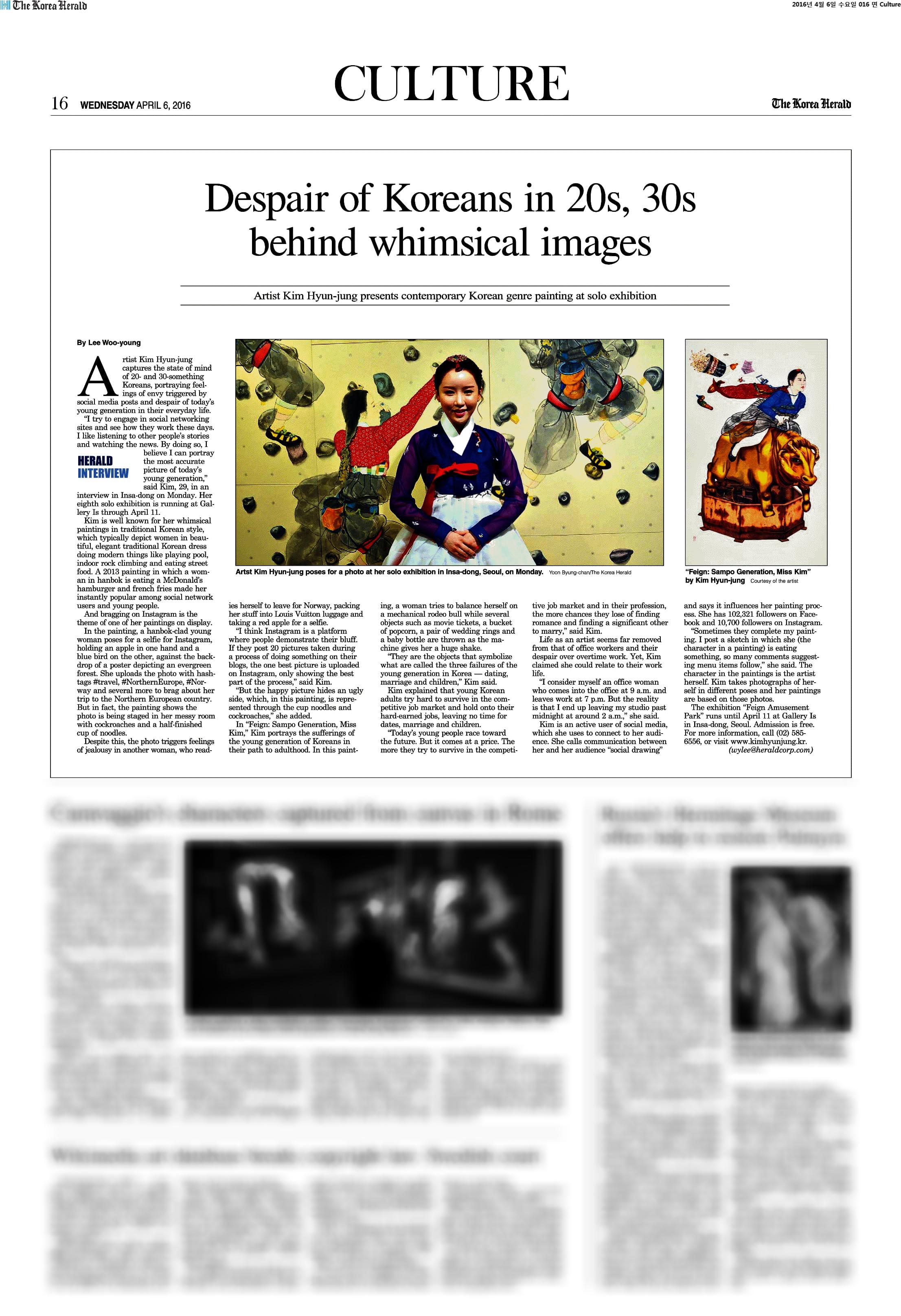 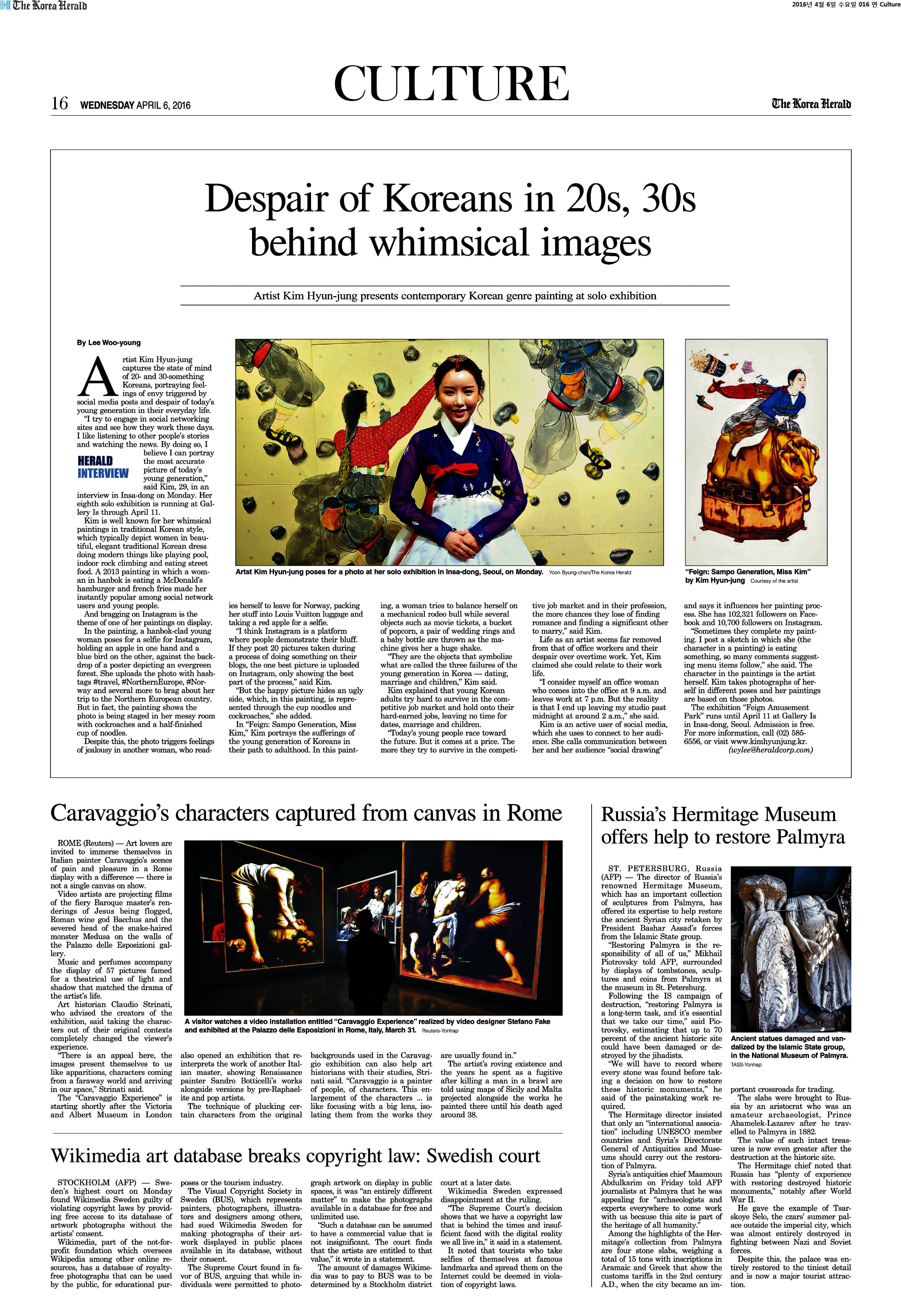 기사 전문입니다.
Artist Kim Hyun-jung captures the state of mind of 20- and 30-something Koreans, portraying feelings of envy triggered by social media posts and despair of today’s young generation in their everyday life.
“I try to engage in social networking sites and see how they work these days. I like listening to other people’s stories and watching the news. By doing so, I believe I can portray the most accurate picture of today’s young generation,” said Kim, 29, in an interview in Insa-dong on Monday. Her eighth solo exhibition is running at Gallery Is through April 11.
Kim is well known for her whimsical paintings in traditional Korean style, which typically depict women in beautiful, elegant traditional Korean dress doing modern things like playing pool, indoor rock climbing and eating street food. A 2013 painting in which a woman in hanbok is eating a McDonald’s hamburger and french fries made her instantly popular among social network users and young people.
And bragging on Instagram is the theme of one of her paintings on display.
In the painting, a hanbok-clad young woman poses for a selfie for Instagram, holding an apple in one hand and a blue bird on the other, against the backdrop of a poster depicting an evergreen forest. She uploads the photo with hashtags #travel, #NorthernEurope, #Norway and several more to brag about her trip to the Northern European country. But in fact, the painting shows the photo is being staged in her messy room with cockroaches and a half-finished cup of noodles.
Despite this, the photo triggers feelings of jealousy in another woman, who readies herself to leave for Norway, packing her stuff into Louis Vuitton luggage and taking a red apple for a selfie.
“I think Instagram is a platform where people demonstrate their bluff. If they post 20 pictures taken during a process of doing something on their blogs, the one best picture is uploaded on Instagram, only showing the best part of the process,” said Kim.
“But the happy picture hides an ugly side, which, in this painting, is represented through the cup noodles and cockroaches,” she added.
In “Feign: Sampo Generation, Miss Kim,” Kim portrays the sufferings of the young generation of Koreans in their path to adulthood. In this painting, a woman tries to balance herself on a mechanical rodeo bull while several objects such as movie tickets, a bucket of popcorn, a pair of wedding rings and a baby bottle are thrown as the machine gives her a huge shake.
“They are the objects that symbolize what are called the three failures of the young generation in Korea -- dating, marriage and children,” Kim said.
Kim explained that young Korean adults try hard to survive in the competitive job market and hold onto their hard-earned jobs, leaving no time for dates, marriage and children.
“Today’s young people race toward the future. But it comes at a price. The more they try to survive in the competitive job market and in their profession, the more chances they lose of finding romance and finding a significant other to marry,” said Kim.
Life as an artist seems far removed from that of office workers and their despair over overtime work. Yet, Kim claimed she could relate to their work life.   “I consider myself an office woman who comes into the office at 9 a.m. and leaves work at 7 p.m. But the reality is that I end up leaving my studio past midnight at around 2 a.m.,” she said.
Kim is an active user of social media, which she uses to connect to her audience. She calls communication between her and her audience “social drawing” and says it influences her painting process. She has 102,321 followers on Facebook and 10,700 followers on Instagram.
“Sometimes they complete my painting. I post a sketch in which she (the character in a painting) is eating something, so many comments suggesting menu items follow,” she said. The character in the paintings is the artist herself. Kim takes photographs of herself in different poses and her paintings are based on those photos.
The exhibition “Feign Amusement Park” runs until April 11 at Gallery Is in Insa-dong, Seoul. Admission is free.
By Lee Woo-young